“The aircraft makes a strong statement about the importance of creating a sustainable future.”

When we supplied the coatings for this Hi Fly Airbus A380, we were helping the Mirpuri Foundation to paint a picture of hope in the fight to save the world’s coral reefs.

Two years after the livery was applied, the same aircraft became the only one of its kind still flying following the COVID-19 outbreak.

Swiftly adapted to take more cargo, it was used for repatriation flights and to transport medical equipment as part of a humanitarian assignment which literally took it around the world. So it was still delivering a message of hope – just an entirely different one. 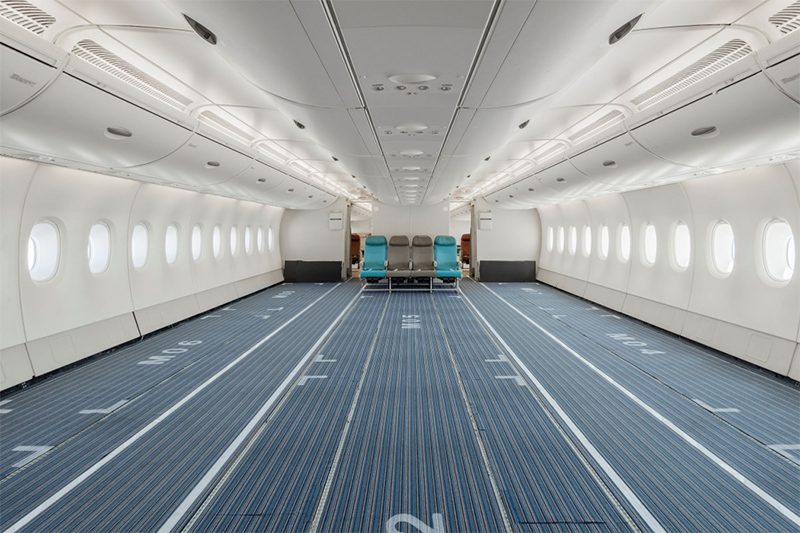 The journey it took was an incredible one. It began in Beja, Portugal, on the evening of May 14 and ended in the same city on May 18. The A380 (operated by Hi Fly) covered 31,047 km in a flight time of 33 hours and 45 minutes, which included stops in Paris, Hanoi, Saudi Arabia, Madrid and Santo Domingo. It was also the first plane to land in Wuhan, China, following the outbreak, when it delivered much-needed medical equipment and took stranded people home.

Throughout its lap of the planet, the A380 continued to raise awareness for marine conservation. The striking livery – which turns heads everywhere it goes – displays different designs on each side of the aircraft. One side depicts a pristine ocean with healthy marine life, while the other shows a destroyed coral environment. 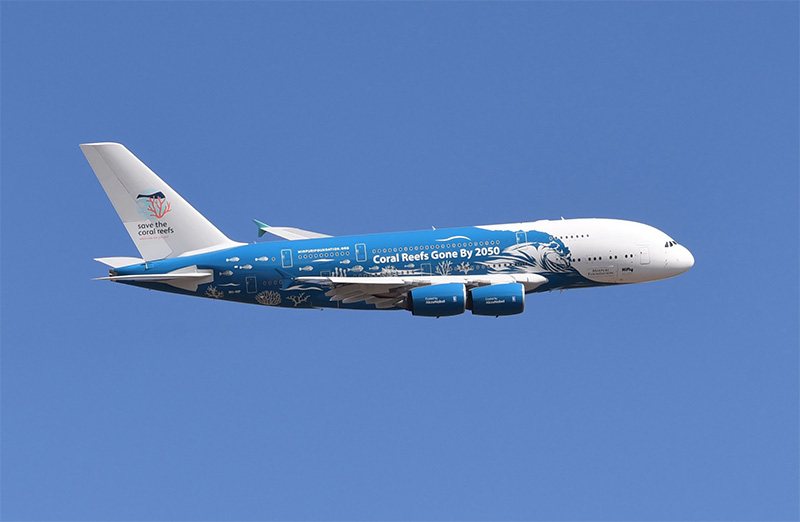 The complex artwork – which showcases the color expertise and technical know-how of our Aerospace Coatings business – was created using 19 different colors, many of which were custom-made. It’s a thought-provoking design which helps to drive home the message that our coral ecosystems will disappear by 2050 if no action is taken.

AkzoNobel has a long-standing partnership with the Mirpuri Foundation, a non-profit organization based in Portugal. We also coated its Turn the Tide on Plastic Airbus A330-200, which helped to increase awareness for a United Nations Environment campaign focused on clean seas.

“We’re proud to be involved with the Mirpuri Foundation’s Save the Coral Reefs campaign, which aligns with our ambition to develop more sustainable solutions for the industry,” explains Sarah Skinner, Segment Manager for our Aerospace Coatings business. “The aircraft makes a strong statement about the importance of creating a sustainable future, and it’s good to see our products being used to carry such an important message.”

Adds Ana Agostinho, Head of Public Relations at the Mirpuri Foundation: “We’re very happy with the high quality liveries that AkzoNobel provides us with. They really get a lot of attention all over the world and thus raise awareness for the important topics our Foundation is working on in order to generate solutions to save the planet. We hope our collaboration will continue for a long time.”

Having logged many thousands of miles, the eye-catching coral reef A380 continues to look fresh, with its brilliant colors having been photographed numerous times over the last two years. In fact, the plane is among the most spotted aircraft in the world.

AkzoNobel helps AeroDelft in their quest for emissions-free aviation