SAS planes are getting a new design for the first time in over 20 years. It’s a fresh take on the simplicity of Scandinavian design, with features that represent the airline’s sustainable and competitive future.

“We’re proud to be able to offer high quality products that help customers like SAS differentiate themselves and make a statement about who they are.”
Robert Rijnsburger, Area Sales Manager, AkzoNobel Aerospace Coatings

The airline’s new Airbus A350 and A320neo, the most modern and fuel-efficient aircraft on the market, will be the first in the SAS fleet to feature the new look – delivered by AkzoNobel’s advanced aerospace coatings systems.

Robert Rijnsburger, Area Sales Manager for AkzoNobel Aerospace Coatings, says: “We’re proud to be able to offer high quality products that help our customers differentiate themselves and make a statement about who they are.

“The high-performance coatings used in the new SAS design offer a number of benefits. With fewer layers of color, the weight of the aircraft can be significantly reduced – helping to save fuel and reduce CO2 emissions. The coatings are also more durable so the aircraft won’t need to be repainted as frequently.” 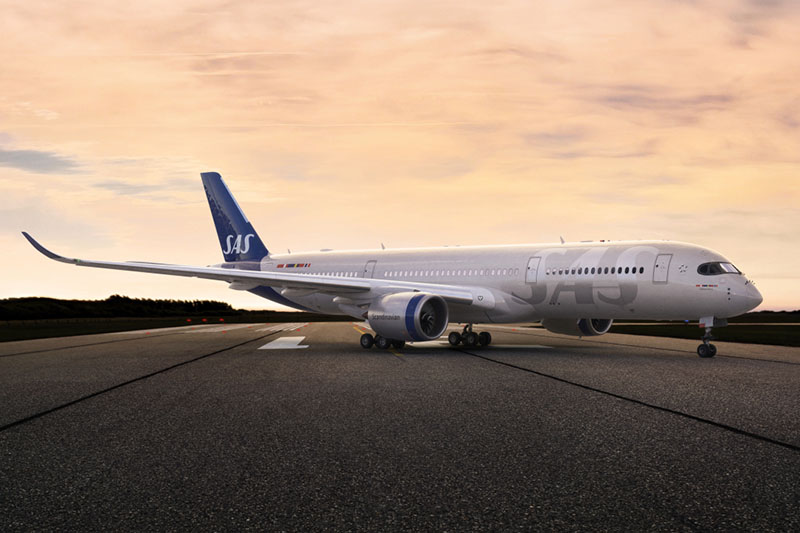 To achieve the desired look, the new livery uses Aerodur 2121 CF Primer and sealer 42240, Aerobase Base Coat in grey and blue and an Aerobase Base Coat special effect, as well as an Aviox clear coat. The result is an elegant design that’s all about the details.

As travelers remain strongly connected to SAS’s signature blue color and logo, those were important parts of the design to get right. Blue now extends from the tail down the body of the aircraft, while a large silver SAS logo has been added to the front.

Other changes include the choice of a fresher shade of grey for the fuselage, modernized Scandinavian flags and silver-grey engines dressed up with blue SAS crowns. For one last touch to honor SAS’s heritage, when the plane flies overhead, you’ll be able to see the word “Scandinavian” from the ground.

While the redesign started with the fleet’s newest aircraft, the existing fleet will also be updated. As each plane goes in for its routine five- to six-year repaint, it will emerge with the new livery. By 2024, the whole fleet will feature the new design coated with AkzoNobel aerospace coatings.